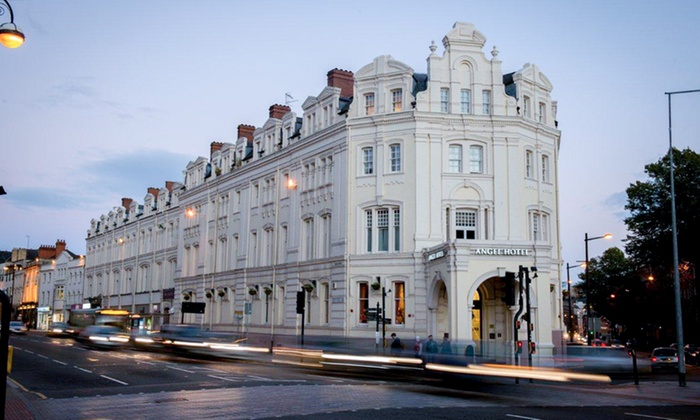 One of the most famous hotel in Cardiff, the Angel Hotel, has hosted the great and the good but that’s not the only reason to stay there!

The Angel Hotel in Cardiff has a long, long history dating back to 1666 when a thriving coaching business was carried on from the Inn in Castle Street.

Before the present Angel Hotel was built, the site was occupied by the Cardiff Arms Hotel, which gave its name to the famous Rugby Ground – The Cardiff Arms Park.

Then in the early 1880’s, the Marquis of Bute gave permission for the Cardiff Arms Hotel to be pulled down a new much larger hotel was built in it’s place to cater for Cardiff’s boom in visitors and trade when it became the largest coal port in the world. In the Summer of 1883, the Angel Hotel opened and from then until well into the 1930’s, the majority of the hotel’s managers were ladies.

During WW1 the American Navy took over the hotel then the Ministry of Pensions took it over and renamed it the USS Chattanooga. The office of the Lord Chamberlain was situated at the hotel for four days during the Queen’s Silver Jubilee in 1977, while the Queen toured Cardiff and South Wales.

After changing hands several times between various hotel groups and the Whitbread Brewery, Puma Hotels took over the Angel Hotel in 2012 and discovered that some of the biggest stars of the silver screen, and the music world, as well as the UK gentry, have graced its rooms.

9 Famous People that Have Stayed at the Angel Hotel

Why You Should Stay Too

Because Cardiff is an exciting and historical city to visit and The Angel Hotel is in an excellent location next to Cardiff Castle and The Millennium Stadium. The landmark Victorian building has all the mod-cons and you can sup delicious cocktails in  the bar and enjoy delicious food in the two restaurants. The Castle Arms cellar bar is also a great spot for private parties and quiz nights.

All of the city’s entertainment and shopping is right on the doorstep and the delights of Cardiff Bay are just a short drive away. And who knows what famous people you might bump into when you’re there!

Which famous person would you most like to bump into in the hotel bar?